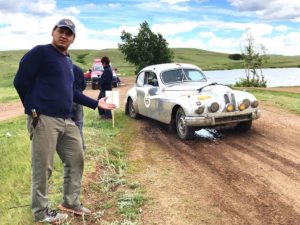 For the past few years the South Australian Squadron have run a three-day, two-night style event which has seen them enjoy some terrific adventures.  The 2017 edition proved to be no exception, full of fun, laughs, excellent roads, scrumptious food and great camraderie as the Squadron forayed on a 300 mile sortie to pick up some pizza.  Peter Forrester, Jo Lewis and Mary and Mike Osborne and Alan and Hilary Miller report.

On Saturday, 9 September, the first four Bristols started the event from Adelaide at the Victoria Park Race Course, bright and early - albeit a bit chilly!  Ready for the 8.00am departure were Frank and Cathy Cord-Udy (403), Tony Bishop (400), Ozi Osman and Judith Orr, chauffeured by Bill Verco in the 402 and Peter and Jo Forrester (405).

The Adelaide crews were set a northerly two-hour course passing through Tarlee to Martindale Hall for the pre-arranged rendezvous with Alan and Hilary Miller in their Red Rocket 400 and Mike and Mary Osborne, accompanied by Maisie, in their luxurious 409, bringing the number up to six.

Morning tea and a guided tour of Martindale Hall were followed by a trip in to Mintaro for lunch at Reilly's, where a thoughtful young waiter offered to take a shot of the group with Ozi Osman's 402.

Saturday night's accommodation was the Paxton Cottages in Burra, with Pizza for dinner at the Black Sheep.

Sunday morning came and we were shown around Burra’s historical sites by local guide and Club member, Christine Bout.  The tour included the cave homes of the Cornish miners dug into the banks of the Burra Creek, the  Redruth Gaol, used as a location for the film 'Breaker Morant', and then on to a number of wide area mining sites.  The mining information centre in Burra North was informative and, incidentally, home to the second oldest quilt in Australia.

Local shops and cafes filled the afternoon, before driving to the Bon Accord Hotel at Burra North which turned out to be a gem.  The landlord, Tim, made the squadron very welcome; his daughter, the chef, produced excellent meals at very reasonable prices and the antique Pianola in the dining area got a good workout.  The place had such a great buzz and we were sad to leave.  A couple of us felt the strains from pedalling in our ankles the next day, but no hangovers.  We are looking forward to another trip there.

Monday morning came, and with it preparations for the long drive home, which involved purchasing quantities of meat at Cooper's, Burra's magnificent Butcher's shop.  On the road back, various crews split off from the squadron to head home or, in Tony Bishop's case, to recce destinations for the 2018 Wedgie.  A dirt road led in to Blanchetown.  There was lunch and a crossing of the Murray by ferry at Swan Reach then the remaining cars returned to Adelaide via Mannum, Palmer, Tungkillo and Woodside.  An excellent sortie for the South Australian Squadron!

BRITISH AT THE BEND In 2021 South Australia